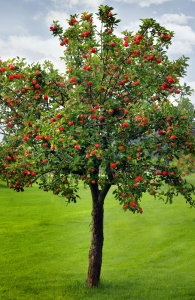 In Gen 2:7 we are told that God formed the man (Adam) from the dust of the ground. Then the Lord God planted a garden in Eden in the east and placed the man there. The Lord God made all sorts of trees to grow from the ground-trees that were beautiful and produced delicious fruit. In the middle of the garden he placed the tree of life and the tree of the knowledge of good and evil. In Gen 2:15 we are told the Lord God placed the man in the Garden of Eden to tend and watch over it. V16 But the Lord God warned him, “You may freely eat the fruit of every tree in the garden-17 except the tree of the knowledge of good and evil. If you eat it’s fruit, you are sure to die.” 18 Then the Lord God said, “It is not good for the man to be alone. I will make a helper who is just right for him.”

In Genesis 3 we are told how the serpent talked to the woman about the fruit of the tree of the knowledge of good and evil. He convinced the woman that the fruit was something she should desire. The woman ate from one of the two forbidden trees in the garden of Eden, then shared the fruit with the man. When God discovered that they knew they were naked He asked them both, “Have you eaten from the tree whose fruit I commanded you not to eat?”

In the beginning was the blame game.  Genesis 3:12 The man replied, “It was the woman you gave me who gave me the fruit, and I ate it” In verse 13 “The serpent deceived me,” she replied, “That’s why I ate it.” The serpent was the only one who blamed no one.

I wonder what would have happened if Adam told God, “Lord, I am so sorry! When Eve offered me the fruit I should have said no. I should have reminded her of your command to not eat and prayed for her. Please forgive me, I have sinned!”

What would have happened if Eve had confessed and repented? “Lord please forgive me, I have sinned.” “I should have told the serpent I will not eat because God commanded us not to eat. I trust God and will obey. I have sinned by believing the serpent rather than You.”

What would happen if all people said, “Lord I confess that I have sinned by not respecting the authority you have placed in my life. In Romans 13:1 Everyone must submit to governing authorities. For all authority comes from God, and those in positions of authority have been placed there by God. I can’t control how authority act I can only control my obedience. When my spouse, pastor, boss, police officers instruct me or point out my error, help me to humble myself, accept the correction and respect authority. Because in the end my response reveals my heart toward You, the final authority.”

What would happen if those with authority admitted to the times they misused their authority and power. They were wrong in their assumptions. Their heart is hardening because of the darkness they are exposed to on a daily bases.

How different would the world be if we all decided to stop blaming others for our behavior, repent of our own wrongs and ask God, “Forgive me for my disobedience, cleanse my heart and restore me.”